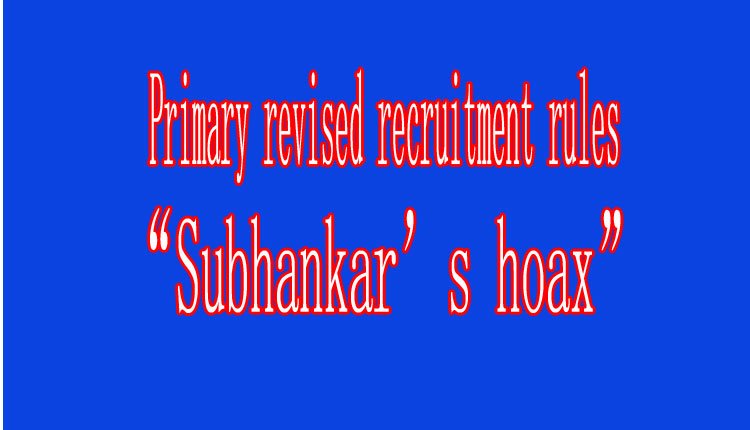 The revised rules for government primary school teachers have been given final approval by the secretary committee. However, before the implementation of the new rules, the teachers have rejected it, pointing out various inconsistencies. Teachers say the new rules deprive them of their due rights.

Teacher leaders say previous secretaries of primary and mass education promised promotions to general teachers but did not implement them. Former officials have applauded the teachers for giving false assurances. Teachers have termed the revised recruitment rules as ‘Subhankar’s hoax’.

Muhammad Elias Hossain, general secretary of the organization, said at the meeting, “We have been deprived of our due rights in the new recruitment rules.” An assistant teacher is usually promoted to the position of headmaster at the very last stage of his career. That is not the fate of many assistant teachers.

He added that there is no good news for teachers in the recruitment rules but there is bad news. According to the new recruitment rules, 80 per cent departmental candidates for the posts of Assistant Upazila Education Officer and Assistant Instructor of URC can participate in the recruitment examination, but not more than 45 years of age. Since you have to take part in the exam with ordinary candidates, it is not a promotion.

Teacher leader Abdul Wahab Sumon said, “We have been demanding for a long time that there will be 100 percent promotion from assistant teacher to head teacher and there will be no more direct appointment to the post of head teacher.” The former secretary had said in this regard that he would never be appointed as a headmaster again.

The auction will be 100% promotion to the post of head teacher. Even so, owning one is still beyond the reach of the average person. But due to age bar and recruitment through examination, no teacher can ever be an Assistant Upazila Education Officer. Therefore, we want the assistant teachers to be given the opportunity of departmental candidature. We rejected the approved appointment rules in the secretary committee as they were not teacher friendly.

Senior Joint General Secretary Masood Rana said a primary teacher usually has to retire from the post he joins. Because there is no chance of any promotion in his destiny. Only 15 percent of assistant teachers are promoted once in their working life. That too on self-pay. For this reason, talented people do not want to come to this profession and do not really want to stay.

President Shahinur Al Amin said, “As the teaching profession is not yet very popular in our country, many meritorious students are reluctant to come to this profession after completing their education.” By implementing our demands, we have to make the teaching profession attractive and bring qualified people in this profession. If these expectations are implemented through the implementation of the National Education Policy-2010, the social status of teachers will increase and the quality of education will improve.

At the meeting 15 demands were raised by the organization. The demands of the organization are to fix the salary of assistant teachers in 11th grade, to promote 100% promotion from assistant teacher to head teacher on the basis of merit, to ensure organizational representation in departmental policy making decisions related to primary education, 7% of national income or 20 per cent of the total budget should be allocated to the education sector, automatic retirement allowance should be paid every three consecutive years, primary education department should be declared non-vacational like other government departments, a gradation should be done at national level from the date of first enrollment. , 13th grade implementation needs to be complicated, DPED trainees need to be given quick discounts on training allowances and those whose salaries have been reduced as a result of receiving training need to have their salaries fixed at a higher level. Since DPED is a one and a half year training course, the post-training scale has to be returned and the salary has to be fixed at a higher level at the end of the training.

Among the demands of teachers are automatic stabilization after completion of 2 years of service, nominal tiffin allowance should be increased from Rs 200 per month to a minimum of Rs 100 per day, all teachers should be paid travel allowance, teachers are not getting government declared housing loan despite being paid in EFT. So teachers have to give unconditional housing loans.

Representatives of districts, upazilas and divisions of the organization expressed their views at the meeting. Khulna division representative said. Imrul Shahed highlighted various problems of DPED trainees. He said that it is inhumane and unreasonable to reduce the salary by taking training, fast, I am seeking the intervention of the authorities for a solution.

The Importance of Student-Teacher Relationships